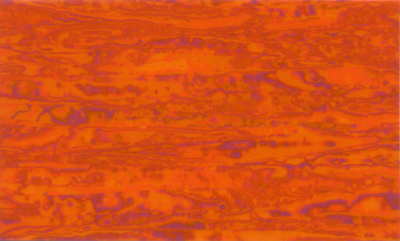 The three psychedelics (psychedelic red, mod orange, citrus mod) were only sold by the Ludwig Drum company (in the 1970’s) and their first catalog they were featured in was the 1971 catalog. Of the three psychedelics, by the 1976 catalog, only the psychedelic red was offered. It too was later dropped from their line. However, years later, a psychedelic red was re-issued by the original factory in the 1990’s, which Ludwig bought and began to sell again. But, this re-issue did not have the same appearance of the original finish- it had more of a water color look compared to the original multi-solid color look. Even so, the Ludwig Drum company continued to sell this finish for about ten years. The reason the finish had a watered down appearance, was the original wrap was made of a nitrite (extremely flammable), which resulted in a distinct appearance, but too flammable to sell from the 1980’s on. The new materials developed (much safer– no fire hazard), did not result in the same appearance, but appeared more watered out. However, with even newer materials and better techniques at the factory, success was achieved, and a new re-issue of all three original wraps released in the mid 2000’s. We are happy to report that the newest re-issue has the look of the original psychedelic wraps and all three are now offered by Jammin Sam. Now you can join the excitement of having these old friends on your drums. Check out all three of these new finishes. This color was originally included here to support our January 2007 article. We have it in stock and available now! See our History of Drum Wrap to read the history of drum wraps. Then take a look at our pricing information. We also sell lugs, tension rods, t-handles & claws, base spurs, rims and hoops, floor tom mounts and legs, tom arms and mounts.