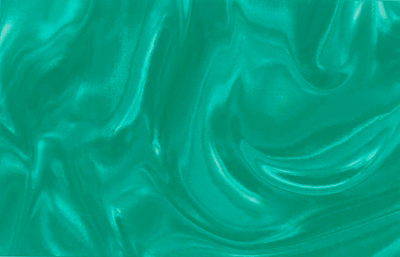 Turquoise Satin came on the scene in the late 1960’s with several other colors.  The Ludwig drum company, in their 1969 catalog, offered the Satins (white, red, blue, gold and charcoal), calling them “Astros”.  However, the company decided to drop all of them by the printing of their 1971 catalog.  The Slingerland drum company offered five colors  in  their 1966 catalog (white, red, blue, gold,green), then later added tangerine and lavender in their 1969 catalog calling them “Satin Flame Pearl”.  However, Slingerland dropped all the Satin finishes sometime in the 1970’s.  The Camco drum company made them available on their drums in the early 70’s (red, blue, gold, purple, charcoal and aqua) calling them “Moire”, but dropped them by 1975.  In the Rogers drum company catalogs we have, no Satin Flame finishes where listed as being available (none listed in 1967 or 1973 catalogs).  Gretsch offered them in 1971 (aqua, gold, moon-glow, and peacock) calling them “Flames”, but also later dropped before the decade was out. Our turquoise is the same as the aqua color mentioned above.

Even today, to our knowledge, none of these finishes are offered by any of the major drum companies in their standard color list.  Even though, and even after more than 30 years, they have not been forgotten.  Today, they continue to be very popular  and purchased by many individuals for their drums.  They are considered inexpensive (costing less than pearls, sparkles, and glass glitters), and have the greatest visual effect of any wrap.  We purchase our Satin Flame finishes from the very same manufacturer that the above drum companies used in the 1960’s and 70’s.  Also, some of the Satin Flame finishes we sell have more scratch resistant properties than the finishes available in the past.  If you want to be noticed in any crowd, and have a piece of nostalgia to boot, then you too, may want to consider one of our spectacular, 3-D looking, Satin Flame finishes.  Check out all of our Satin Flame finishes.

See our History of Drum Wrap to read the history of drum wraps. Then take a look at our pricing information. We also sell drum hardware and accessories.

Manage Cookie Consent
To provide the best experiences, we use technologies like cookies to store and/or access device information. Consenting to these technologies will allow us to process data such as browsing behavior or unique IDs on this site. Not consenting or withdrawing consent, may adversely affect certain features and functions.
Manage options Manage services Manage vendors Read more about these purposes
View preferences
{title} {title} {title}