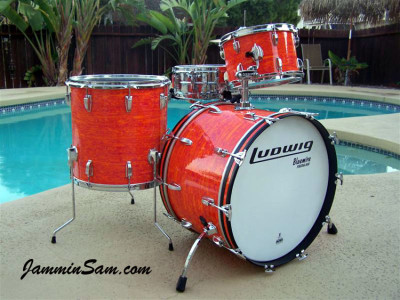 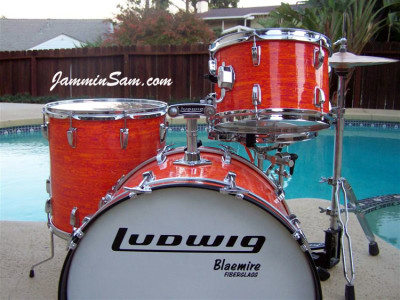 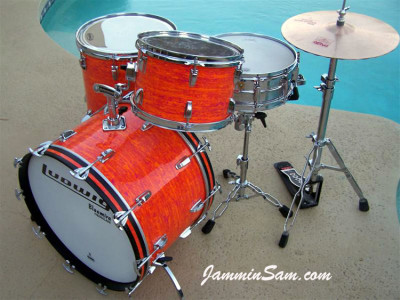 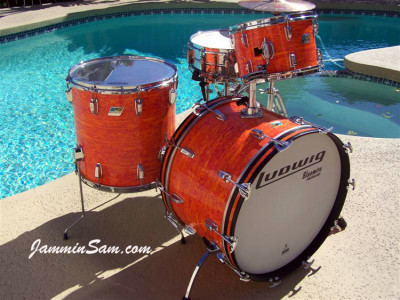 Pictures sent in (October 2008) by Jerry Jenkins from Thousand Oaks, California of his drum set. Awesome pictures, and an awesome wrap job Jerry!

Jerry writes:
Hi JS,  Here are the pictures of the newly finished Mod Orange kit I did.  This project has been a long time coming.  I have always liked Ludwig’s Mod Orange wrap (I am a child of the Psychedelic 70″s)… but… three ply Ludwig’s never gave me the raw power I wanted. I came across a set of Blaemire fiberglass shells, from different sources, that were in sad shape… but perfect to wrap. Then… I saw a re-wrapped snare on eBay, that had a newer version (yours) of Ludwig’s Mod Orange. This is not the re-issue wrap that Ludwig came out with… that was not even close. This was a very good representation of the 70’s wrap. [Thereafter] the project began.  Blaemire shells- Ludwig hardware-Mod Orange wrap-!!!  I’m in hybrid heaven!!!  Thank you for some great wrap.  Best Regards… Jerry Jenkins