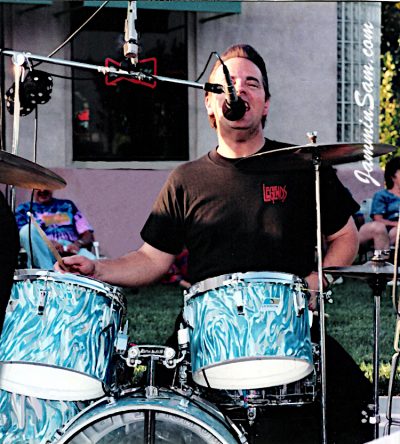 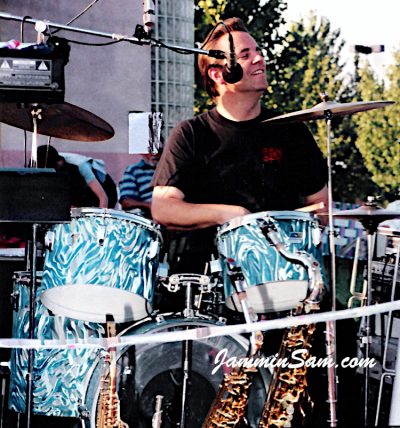 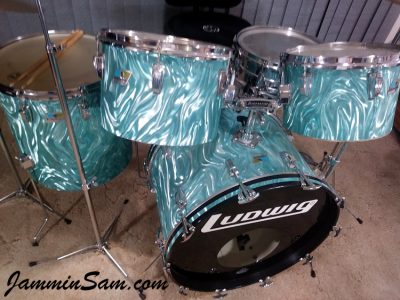 Joe writes:
These orphan 12″, 13″, 16″, and 22″ Ludwig drums were brought together and wrapped in turquoise satin flame from Sam Barnard sometime in the late 80’s. They were played almost every weekend for about 15 years. They received many compliments on their unusual appearance and also some amazement from other drummers who said they didn’t know Ludwig made drums in that color (they didn’t). Since there was no internet in those days the availability of professional drum re-wrap material was not well known. They are shown in action in a YouTube video taken about 1993. Unfortunately, the low resolution of the portable VHS camera doesn’t allow the satin flame effect to come through like it does in the photos with the sun or bright lights.

Due to changes in my day job, the drums were put away in cases for the last 15 years. After day job retirement a month ago the drums were uncased and readied for playing again. They seem to have held up pretty well for 30 years as the photo shows!

I have rounded up a double bass batch of orphan drums that I’ll be ordering some wrap for soon.

p.s. The Drum Only photo was taken August 5, 2018. The other 2 photos of my drums and I (Danger: Men and Equipment Working!) are with The Legends band at Hudson’s Grill Classic Car Cruise-In, Summer 1995.

Manage Cookie Consent
To provide the best experiences, we use technologies like cookies to store and/or access device information. Consenting to these technologies will allow us to process data such as browsing behavior or unique IDs on this site. Not consenting or withdrawing consent, may adversely affect certain features and functions.
Manage options Manage services Manage vendors Read more about these purposes
View preferences
{title} {title} {title}