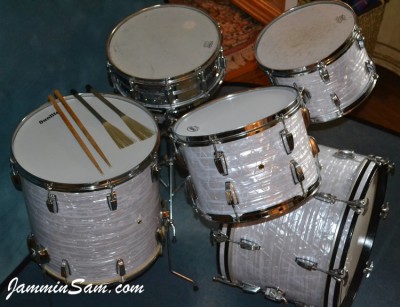 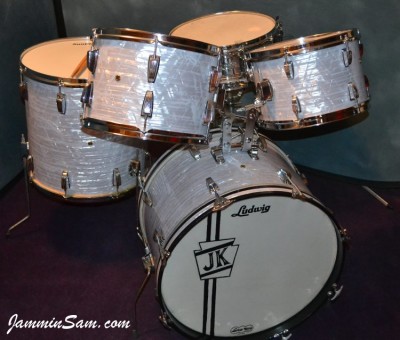 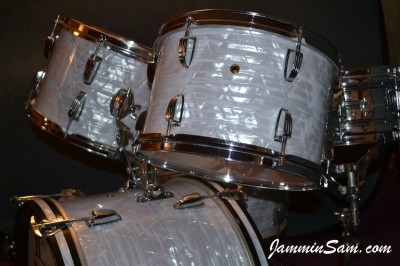 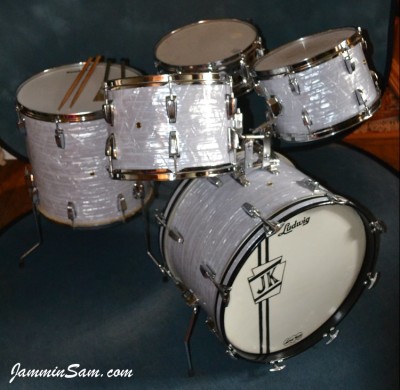 Picture sent in (January 2014) by John Kreimer from Atlanta, Georgia of his Ludwig drum set.  Thats a winner John! [fblike]

John writes:
Here are pictures of my newly recovered set. (I’ve even included the photo from the 1960 Ludwig catalog as a comparison)

I’ve owned the bass drum since 1966. My original Ludwig toms were stolen in 1969 while I was unloading prior to a gig. In a frantic search for replacements so I could keep working, I could only find two Slingerland in red sparkle. At that time, the only pearl I could find to recover the toms was the Slingerland style white pearl which would not match the bass drum, and I could not afford to buy two new Ludwigs to match the bass. My solution was to cover all the drums in something completely different. Over the past 40+ years, I was not happy with the color of the set. After acquiring 3 vintage Ludwig toms, I decided it was time to recreate my old set. Thanks to the Internet, I found Sam and the original style Ludwig marine pearl! The result is outstanding. The set looks like it did in 1966 and people remark that that pearl usually yellows over that much time. I just smile.

The recovering process was MUCH easier than it was over 40 years ago when I had to use contact cement (one chance only to get it lined up correctly). The tape makes the job much more enjoyable. After attaching the smaller piece to the bass drum, I lined up the larger piece at the first overlap and temporarily clamped it to the drum (without removing the liner tape). This made it easier for one person to pull the larger piece to line up with the other end and still keep it lined up with first end. Once it looked good, I completed the process on that overlap and clamped it down. I then went back to the other overlap and completed the process on it.

p.s.: I have more photos if these don’t work.